THE PINNACLE OF LUXURY LIVING 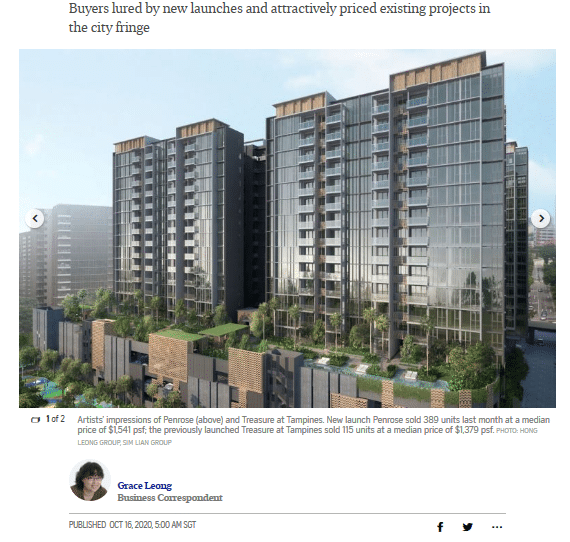 The private home market continues to defy gravity amid the pandemic, with last month’s sales up for a fifth straight month to hit levels not seen for more than two years.

This was the highest number of private new home transactions since July 2018, when 1,724 units were transacted after new property cooling measures fuelled a surge in sales from buyers rushing to beat the deadline.

Attractively priced projects in the city fringe – known as the rest of central region – continued to fuel sales last month, accounting for nearly 65 per cent of total transactions, analysts noted.

The standout among three new non-landed launches last month was Penrose in Sims Drive, while existing top sellers such as JadeScape and The Woodleigh Residences also fared well.

Penrose shifted 389 units at a median price of $1,541 psf to account for about 45 per cent of total developer sales in the city fringe, according to Knight Frank.

Want the best developer discounts or latest information updates on Penrose, including available units? Then call us at +65 6100 8833. No Obligation or Fee Required. Just chat with us to learn more about this exciting development.

Being Officially Appointed Penrose Sales Agents, we are able to offer you the best deals always! Better still, should previously sold units become available because of non-exercise of options etc, we will be among the first to know.

Visits to Penrose showflats are strictly by appointment only. Call us today to arrange your private visit. Alternatively, email us using the attached contact form.

We are pleased to offer you comprehensive advice about your private ownership at Penrose, and we can assist you with all aspects of the purchase of your apartment.